A year ago, the global polyurethane market, which had always been quite conservative, surprised the players with the unpleasant development. The isocyanate prices, relatively stable before that, hiked sharply. This circumstance jeopardized Russian converters and slowed down the industry development in general. At present, the PU market in Russia is still dependent on the supply of imported raw materials, and the industry representatives are anticipating support and a new development impetus from the government. 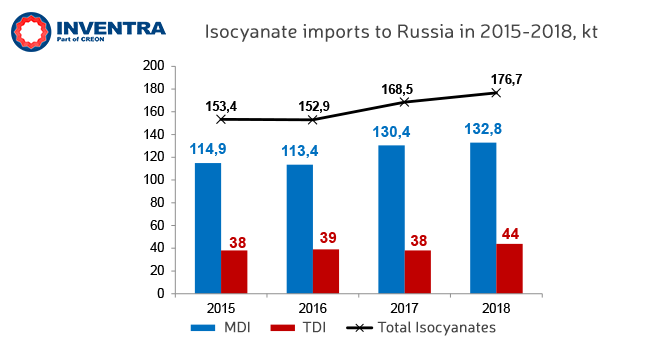 As estimated by CREON Group, the total volume of PU production in Russia reached 346 thousand tons last year, exceeding by 3.3% the production in 2017. The market continued to grow even during the isocyanate price hike, which lasted until June 2018 when TDI price in Europe almost reached € 3.5 thousand per ton for example. But the situation changed dramatically after June: the price sharply declined to less than € 2 thousand per ton.

Since that price rally, the Russian producers of raw materials are divided into two camps: some say that they are in negotiations to start production of MDI and TDI since long, while others insist that no new production of isocyanates will appear in the country in the next ten years, because the market is unstable. Not all of the system houses have managed to maintain a positive trend in sales growth in the past year due to price fluctuations, and some are already preparing for growth, expected in spring.

However, there are prerequisites for growth in the industry despite the unsolved problems. In 2018, even a large segment of PU consumption in Russia represented by PIR panels market overturned stagnation forecast by growing 10%, and may grow by another 15% this year. Perhaps, the optimistic spirit of the sandwich panel producers is associated with the project by the Ministry of Industry and Trade of Russia aiming at increased production of PIR and similar products by 2.5 times by 2025. The flooring market also grew significantly last year, from 14 thousand tons to 18.8 thousand tons, with epoxy floors leading (7.1 thousand tons), and polyurethane floors following (7 thousand tons): most of this production was local.

In the construction sector, the demand for PU is still high, despite the negative dynamics of construction in general. At the beginning of 2018, the consumption of polyurethane materials in construction segment amounted to $ 58.5 billion (36% of the total). PU consumption reaches a new level not only in the construction segment, but also in the furniture industry, agriculture and refrigeration equipment. For example Haier, the largest producer of refrigeration equipment, has clearly indicated its readiness to further localize production and has supported isocyanates production inside Russia. But would it be feasible? This is an ambiguous point, because one needs to take into account the current market volume locally, and the capital expenditure for commissioning such a plant standing at about € 1.5 billion. Will the return on investment in Russia be sufficient?

LNG event in Hamburg: How to shape the value-chain of LNG