The better the more. Is it?

For many years, Russia has been among the world leaders in gold mining, and will retain its positions in future. Though the industry is regulated and controlled by the government, successful development is there: production of vein gold grew by half over the past eight years in Russia. 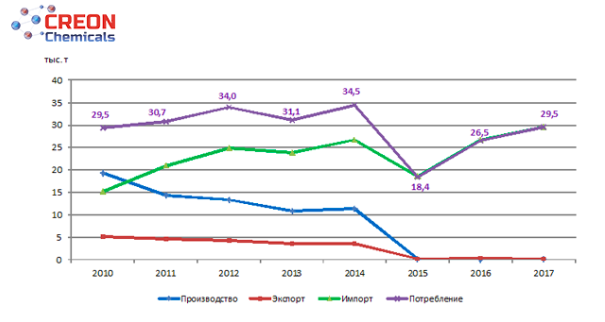 Currently, the demand for this product is met by imported supplies, as there is no local production in Russia. 2017 saw the record volume of calcium hypochlorite imports at 30 thousand tons. For several years now, the main source of supplies has been China, with high quality (available chlorine at 65%) combined with low price (in the range of $853-891 per ton in the past four years).

However, things are changing, and Chinese suppliers can be challenged by domestic producers. There are several announced projects now for production of Ca(ClO)2 in Russia. If they are accomplished, about 100 thousand tons of product will pour into the market by 2025.

In March 2018, Khimprom (Novocheboksarsk) commissioned a unit for production of highly concentrated calcium hypochlorite (min. 65%) with a capacity of 15 thousand tons per annum, and produced a trial batch of the product.

In February 2016, Kemerovo Khimprom and GIPROIV Company also started the design of production facility with a planned annual capacity of 5 thousand tons. The start of industrial production was scheduled for Q1 this year, but then postponed for indefinite time.

Volgograd Khimprom plans to produce bleaching powder (min. 25%), and is looking for investors to implement the project.

NIKOCHEM Group of Companies included organization of calcium hypochlorite production with the annual capacity of 50 thousand tons on the basis of NikoMag in its investment program, with no further information concerning the project.

The projects for Ca(ClO)2 production (min. 60%) in Irkutsk are interesting. These are based on associated feedstock of Yarakta oil and gas condensate field (developed by Irkutsk Oil Company) and natural brine of Znamenskoye industrial groundwater field with the capacity of 30 thousand tons and 3.85 thousand tons, respectively. And while the plans for the development of Znamenskoye field seem vague, the outlook for Irkutsk Oil Company is quite clear. If this project is implemented, Russia will have the production of calcium hypochlorite in the immediate vicinity of the place of consumption.

Thus if all the projects are commissioned successfully, there will be an oversupply of calcium hypochlorite in the Russian market by 2025. The only option to sell it would be exporting, but in this case the Russian reagent will have to compete with the Chinese product. Will it have the edge? Not clear. Strangely enough, cancellation of any of the projects will not be a tragedy; on the contrary, it will balance the market.