PET Market: What are the targets?

In 2018, the situation in the global PET market was intriguing: the annual production reached 30 million tons, while the demand was nearly 23 million tons. Such figures would have implied overproduction on the global scale, but the reality was that there was no surplus. The explanation was in the problem that the industry had faced in 2018: some production capacities at several enterprises had been suspended for maintenance and due to force majeure in the first half of the year.

In early 2019, new dumping and anti-subsidizing measures were introduced against China and Japan, which leads to the redistribution of PET import and export flows. Consumers should be prepared for rapid homologation of new materials from various suppliers.

The Russian market was expecting an impressive growth in demand for PET-based packaging due to the World Cup in 2018, while the reality was different: the PET consumption grew by 6% as expected, but a number of producers announcing force majeure caused the shortage of feedstock, hence the price soared up to 140 thousand rubles per ton. At present, the PET price has dropped down, but at the same time there are no reasons to expect serious increase in consumption. 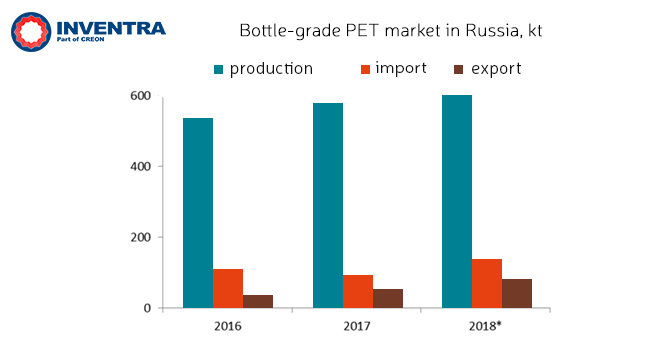 Perhaps in the current situation, the new and the existing market players have to think more about higher-margin PET products like fibers, threads, films and sheets. There will be new capacities launched soon in Russia for production of BOPET films for industrial and food packaging, lamination, as well as shrink, electrical and protective films. These capacities are scheduled for commissioning by 2020 as part of Titan Polymer’s plastics converting plant project. Apart from this, the company will launch the PET granules production complex with a capacity of up to 170 ktpa by 2022.

The better the more. Is it?